I believe that few of the readers are able to estimate the laboriousness of the video card production. Graphics cards, as a complete product that you can buy at the local computer store. For me it is also not easy to estimate. However, even with my meager knowledge, I understand that each new product is the work of a whole team. Someone designs the GPU architecture, others do the software stack, still others design the PCB, the fourth do the cooling, the fifth test and submit reports describing the issues and errors. And this, not counting the additional staff, those who manage the process, interact with the application software developer (read "game developers"), advertise and promote, work with sales channels and provide component supplies, warranty service and repair. In other words, a properly structured process is always the work of a professional team. If this is not the case, the success of the product in the market will always be a big question. What if …. all this will be done by one person? I would answer that if this is real, then this will take years and by the time such a product appears on shelves, its relevance will be zero. And, in general, I will be right when it comes to some kind of advanced solution that should meet the urgent needs of humanity. But when it comes to a set of operating systems, games and programs frozen in time, the situation here is far from so unambiguous.
In the case of old graphics cards, a lot has already been done (the graphics processor itself is already exists, the software stack is quite mature), but something simply does not need to be done or it has become much easier to do due to the development of technology. Nevertheless, in this case, there is a huge layer of work, unaffordable for an ordinary amateur.
First, it is necessary to study a huge amount of documentation for devices, if it is available. And if not? Further, regardless of the availability of documentation, it is necessary to study the layout of existing products and it looks not just like "took a picture in front and back and paint it the same, but cooler." All this is serious engineering work which in addition to knowledge in the field of designing electronic devices, requires additional skills. You will try to study and understand tens and hundreds of text pages in foreign language, without understanding of specific terms. Fortunately, talents have not died out on the Russian land. And after several years of painstaking work in the development of a whole line of accelerators based on 3dfx chips, zx-c64 presented to the public the dream of my youth, the Voodoo 5 6000 accelerator.
Honestly, when the first Voodoo cards from zx-c64 appeared, the first thing I thought about was that sooner or later he would make a six-thousander. When it will do it was not clear, but that this product will be, I never doubted.
Earlier in my collection there were already 3dfx Voodoo 5 6000 accelerators, as many as three. All of them were bought by me in Ukraine, one card from ALT-F13, a couple of others from another enthusiast from Kiev. Unfortunately, in the process of experiments, one of those cards was irretrievably burned, while I learned about the irreversibility of this loss later, after I sold this card to hard1k, who, in turn, gave it to zx-c64 for repair. Unfortunately, even Anthony could not restore the board, but its physical presence helped him to understand the nuances and allowed him to complete the project of designing a new printed circuit board with a lot of improvements.
So what is the output? In total, two revisions of the Voodoo 5 6000 from zx-c64 have got into small-scale production at the moment. The first revision of the card was released in the amount of five boards, which have already been bought by enthusiasts and sold to their personal collections. Officially, the boards were shipped without boxes. The accelerator itself came either in an antistatic bag, carefully wrapped in foam, or was neatly placed in a specially made cradle. 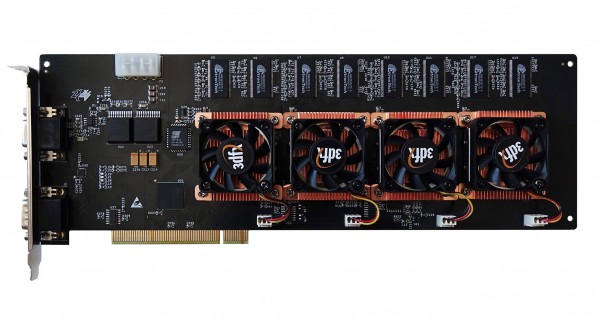 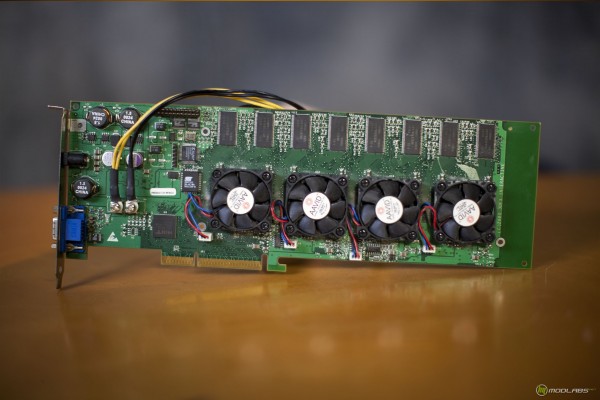 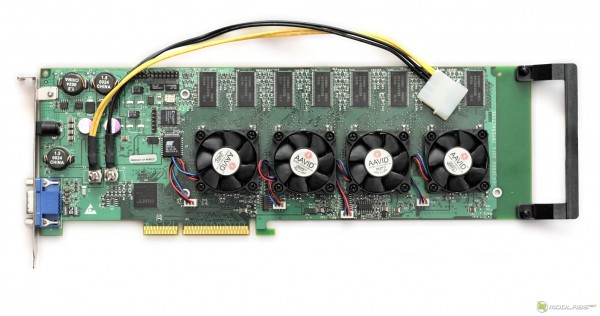 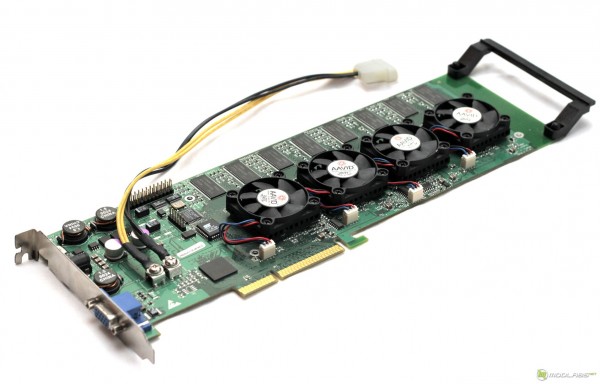 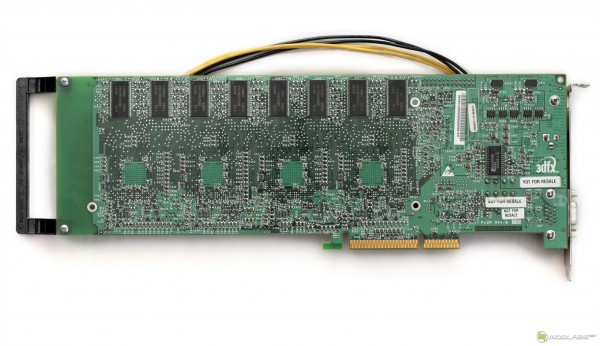 So, the first and most important difference is the interface. All original prototypes of 3dfx Voodoo 5 6000 cards were designed for the AGP bus. 3dfx itself never planned to produce PCI versions of the flagship board, while this was not relevant for such a powerful accelerator.
Why did zx-c64 focused on PCI performance in the first place? The fact is that at present, universal retro PCs are very popular, in which powerful and modern devices are adjacent to old ones to ensure maximum compatibility with retro games, without sacrificing performance in the Windows 2000+ generation OSes and programs for them.
Thus, the PCI version of the card provides ample opportunities for choosing platforms. You can install the Zx-c64 Voodoo 5 6000 PCI in both an older Intel 440BX based system or, for example, an Intel X48 based motherboard. In either case, it will work, while the second video card can be any available graphics adaptor.
The first revision normally allows installation only in 32-bit PCI slots operating with a clock frequency of 33 MHz. But, if desired, by ensuring the correct isolation of the power pins on the PCI connector of the board itself, as well as removing the jumper on the motherboard that supports the PCI66 bus, the first revision of the Zx-c64 Voodoo 5 6000 PCI can work with a 66 MHz bus.
Pay attention to the photo, the connector of my sample is already prepared for working with PCI66, you just need to find the motherboard and modify the PCI66 slot. 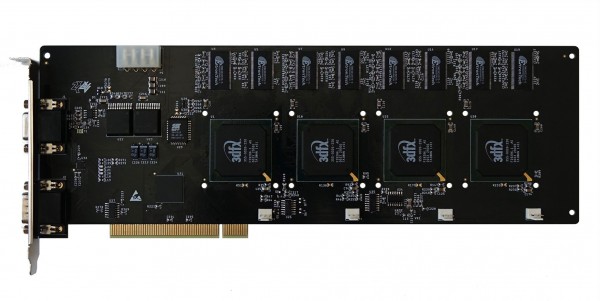 The next important difference from the 3dfx prototype is a slightly redesigned power subsystem of the board.
All boards of the first batch use GPU rev. 220 VSA-100. To power the graphics chips, a 2-phase power supply system is used, the memory power is taken from the motherboard slot. The power system uses highly integrated LMZ23610 modules, which include a power controller, coil and power transistor.
At the time of the relevance of the Voodoo 5 6000, many PCs were equipped with 200-250 W power supplies, and 300 W power supplies were already a rarity and the lot of wealthy owners of the most expensive PCs. I'm not even talking about the fact that only few thought about power supply quality. That is why 3dfx engineers were seriously considering using Voodoo Volts (a new external power supply unit from 3dfx, 12 Volts 4.6 Amperes) to power their flagship product. On my original prototype, a power connector from the computer's power supply was also soldered, which gave freedom of choice and increased ease of use.
As for the Zx-c64 Voodoo 5 6000 PCI, in the first revision of the board, additional power is supplied only through a standard Molex connector, since there are plenty of high-quality power supplies around - choose any. 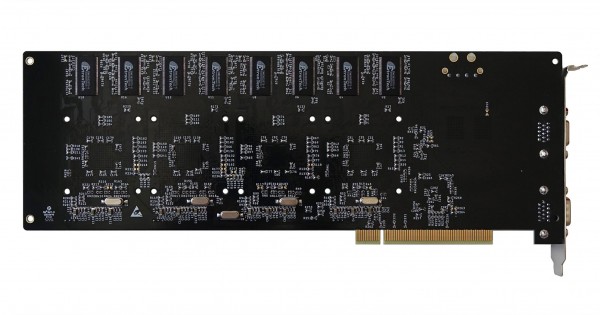 On the card's backplane, in addition to the analog D-SUB connector, the zx-c64 placed a Pass-Thru connector that allows you to output video signals from both the AGP video card and the Zx-c64 Voodoo 5 6000 PCI without the need to switch the video signal on the monitor or reconnect the cable. The principle of operation is the same as that of the classic Voodoo graphics / Voodoo2 accelerators, with the only difference that the quality of the analog video signal should be higher due to the use of the modern MAX4885AE multiplexer
Immediately anticipating the questions of those in need about the possibility of using the DVI / HDMI interface. In the case of 4 GPU VSA-100, it turned out to be extremely difficult, almost unrealistic, since an analog signal is used between the pairs of GPUs when forming the final image. In the case of one or two VSA-100s, there is no such problem, but 4 chips do not allow realizing a digital output, since in addition to hardware limitations there are also software limitations - there is no support for a digital interface at the driver and BIOS level.
Another change concerns the mechanism for setting the clock frequency of GPUs. If earlier the tiny XC9536 FPGA chip was responsible for this on original prototypes, now the frequencies of the four GPUs are set by 4 quartz resonators 14.318, the fifth is used for the ICS307 synthesizer.
A few words must be said about cooling. If the original prototypes were made, to put it mildly, "if only it worked", then the zx-c64 product is equipped with very quiet and high-quality coolers. Unlike the glued aluminum patches of the original prototype, the Voodoo 5 6000 from zx-c64 uses four copper coolers, usually used to cool down Socket 479 processors. These coolers were modified by Anthony and installed on the board using metal brackets located on the back of PCB. I can say with confidence that the stock zx-c64 cooling system not only keeps the temperature of all GPUs within reasonable limits (even under load with 8xAA), but also keeps the noise level very low. I measured the temperature of the GPU heatsinks during stress tests using a budget laser thermometer and, taking into account the error, none of the heatsinks warmed up above 57 degrees. The same applies to the power supply system, it was about 51-53 degrees under load. True, the chosen solution also has disadvantages. The point is that the total mass of the accelerator with the installed cooling system is about 670 grams. Of the entire mass, about 500 grams is accounted for by the cooling system. My operating experience suggests that it is better to use this card in a vertical position (on a stand or in a case that allows horizontal mounting of the motherboard). In the case of standard enclosures, I highly recommend fixing the back of the board to a stand or a standard enclosure clamp, if there is one. I have done this: 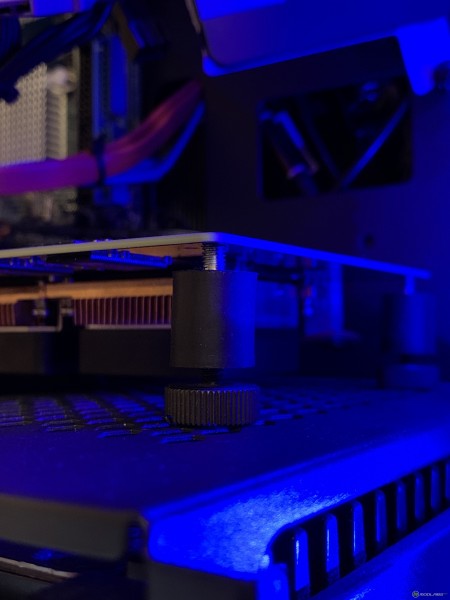 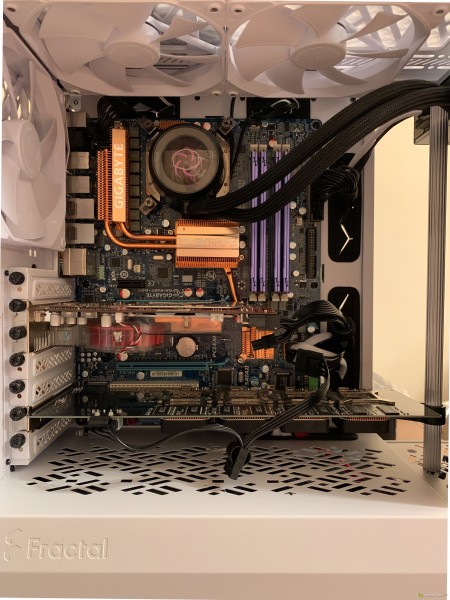 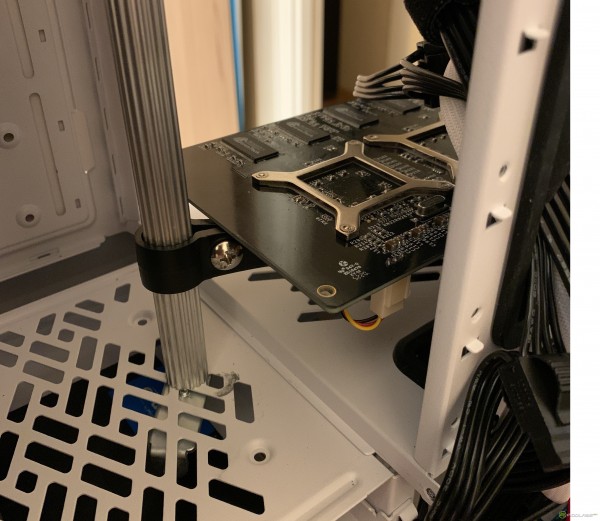 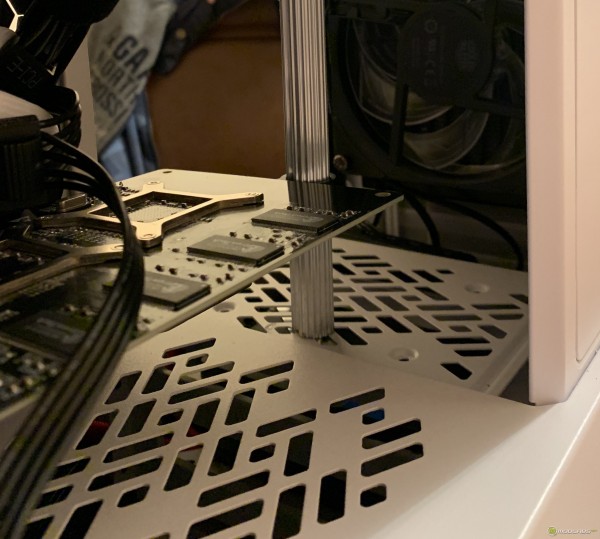 Thus, I conclude that the weight of the card does not have the best effect on the ergonomics of the board, however, its influence is not critical. Personally, I was able to easily fit both of my cards in conventional cases. One way or another, if the owners of the first five cards want to lighten their "burden", the presence of holes in the PCB makes it possible to do this without much effort, all the more from nice little things - standard fan connectors are placed right on the PCB. It is very convenient from all points of view. Once you've found the best solution for cooling your board, you're ready to house it.
Now about the box. Since the first batch did not involve the release of boxes, I decided to coordinate the release of my packaging options with zx-c64. After approval was received, I started a collaboration with a friend of mine, who performed the artistic part of the work. As a result I got the following box design: 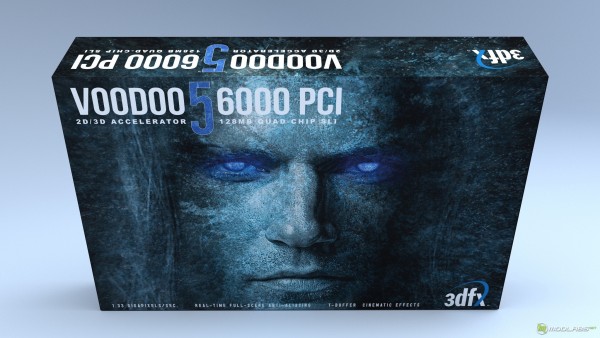 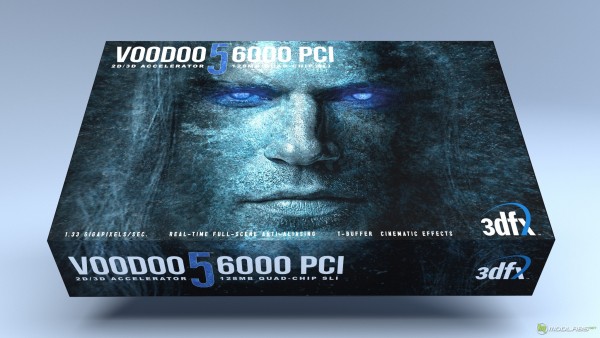 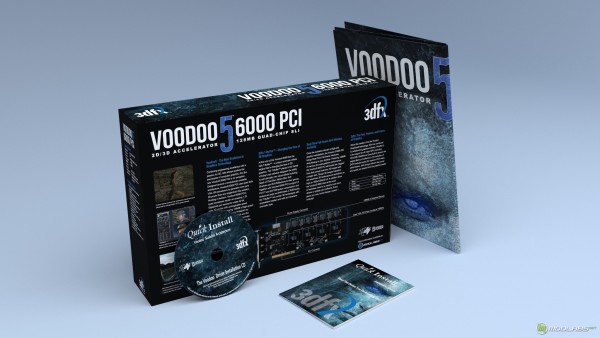 It is assumed that in addition to the box, a proprietary disc with drivers and utilities, instructions and a poster will be released. At the moment, not a single copy of the box and accessories has been released, but the plans for the release have not gone anywhere.
Summing up the first results, we can say that from the hardware point of view, the board outperforms the initial 3dfx prototype even within the first revision. Among the obvious improvements are an upgraded power system, a more efficient and quieter cooling system, the presence of a Pass-Thru connector, universal cooler mounts and common fan connectors.
Now is the time to talk about choosing a platform for this gem.
<< Назад Далее >>