So, let's say you bought a Voodoo 5 6000 from zx-c64 and while it is on its way to you, you decided to choose the optimal system configuration, both in terms of compatibility and performance. I must say right away that at the moment this issue has not been fully investigated by me, since for full-scale testing it is necessary to have a lot of platforms at hand and, of course, a lot of free time. That is why, I do not presume that everything described in this section will remain relevant after the release of this material, nevertheless, I will share the experience gained, which will allow you to get good results now, both in terms of performance and compatibility. ...
I will say right away that I personally believe that the installation of the Voodoo 5 6000 PCI from zx-c64 is relevant only on platforms that came out much later than the serial video cards based on VSA-100 saw the light. Why? I explain. Firstly, PCI performance itself implies the presence of a more efficient and technologically advanced accelerator in the AGP slot. Such an accelerator will require appropriate support from both the motherboard and the CPU. Secondly, the Voodoo 5 6000, being a card with four GPUs, and even devoid of a hardware T&L unit, is very dependent on the CPU speed. These two facts already indicate that platforms of the Pentium III class, with all due respect to them, should be left out of our attention.
For universality, as usual, you also have to pay. Not all boards are equally compatible and performant when working with PCI devices. So, for example, I have tested:
Based on the results of measuring the PCI bus bandwidth (testing was carried out using the corresponding subtest from the Final Reality package), all boards can be conditionally divided into three groups:
1) Boards based on i865 (I believe that the situation is the same on i875) are the fastest; when working with 3D, the speed of data transfer through the PCI33 bus is about 107 MB / s.
2) Motherboard based on nForce3 - show an average performance, about 95 MB / s. 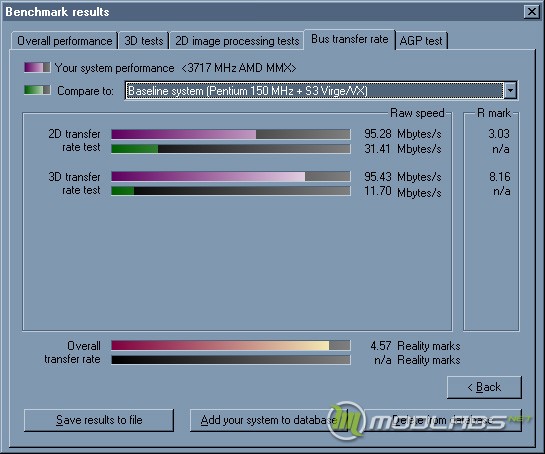 In order to understand how the PCI bus bandwidth affects the performance results, I carried out express testing in 3DMark 2000. I am sure that the bus bandwidth will have different effects in different tests and games. Obviously, to present the full picture, you need to write a separate material, but now there is another task. I wanted to choose a basic configuration that would allow us to carry out a full cycle of tests without any tricks and present to the public a more or less relevant picture demonstrating the capabilities of the Voodoo 5 6000 PCI from zx-c64. And in the future, of course, this topic can be developed, which is only the world of workstations and servers of different levels, where you can find cool solutions with PCI66 ... .. In short.
The highest performance indicators per processor frequency unit were shown by i865-based boards. All tested solutions worked with Core 2 Extreme x6800 at 3 GHz (800 MHz niche, multiplier - 15). The result was in the region of 9000 final points. Similar performance indicators (+ a couple of dozen points) were achieved on the only tested AMD platform (Phenom II X4 980 3.7 GHz + nForce3). But the newer Intel chipsets, those that work with DDR2 / 3 + PCI-Express, in spite of their manufacturability, rested on 8500-8991 points, depending on the processor clock speed. The highest score was on the x48 + E8600 @ 4.0 GHz, where a result of 8991 points was achieved.
From the point of view of personal preferences, I really like the i865, but in the end, for testing, I chose the aforementioned AMD platform. It is fully compatible with Windows 98 / Me, it shows medium-high performance level, without embellishment, and finally, it supports all possible SIMD technologies that could potentially be used to speed up games of the 90s. The only thing you need to know when working with motherboards on nForce3: if you have an accelerator based on VSA-100 and you are installing a driver from AmigaMerlin: be sure to set the VIA Chipset optimization item - BIOS defaults or Fail Safe. Otherwise, the system may periodically freeze in 3D. 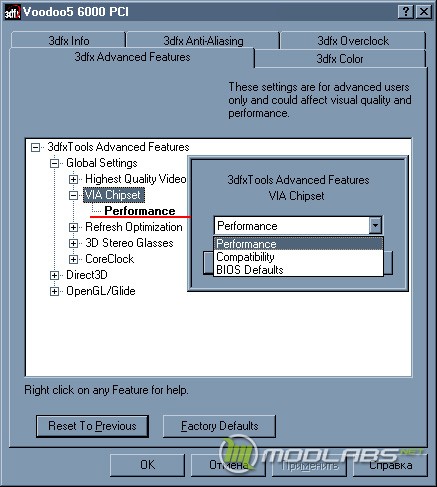 I also draw public attention to the incorrect operation of the memory subsystem in old operating systems (Windows 98-Me, in particular) on systems and chipsets with more than 3 GB of RAM installed. For example, on PCI-Express Intel chipsets (I'm talking at least about G31 / 41 and newer). If you decide to use such a system, make sure that the installed amount of RAM does not exceed 2 GB, otherwise the performance in 3D games drops by about half. A similar scenario is planned to be tested on the AMD platform.
At the moment there is an assumption that if you do not touch the memory drivers for Windows, switching the Memory remap option to Disabled will solve the problem, but this topic is under study and if you have something to say - welcome to this thread of our forum. If you are an English speaking user, feel free to write in English.
I also want to supplement the material with information from colleagues. The zx-c64 itself reports that when the frequency threshold goes over to 3 GHz on the Intel platform, apparently due to errors in the drivers, the Voodoo 5 6000 starts to hang. Tested on Windows XP. I conducted preliminary testing on two accelerators from the first batch, all my tests were performed only under Windows 98 / Me and I have not yet revealed an obvious effect of the CPU frequency on stability, however, zx-c64 will not just raise the issue, most likely there is a problem. This is Voodoo 5 6000 - not the first 3dfx card to show a "speed bug". It is necessary to compile a new version of drivers from the source code, correct mistakes of the past. If anyone wants to help, write me here, through the forum or by email.
Summarizing the information provided on choosing a platform:
<< Назад Далее >>